This is adapted from a Door To Door Organics recipe. I used it as part of a dinner along with the Quinoa Egg Veggie bake. I really love the flavors of the eggplant and tomatoes and it makes a great vegetarian and low-glycemic appetizer or side. 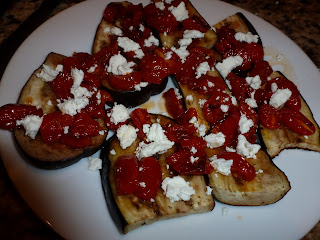 Roasted Eggplant with Tomatoes and Goat Cheese Recipe
1 eggplant, sliced about ½" thick (could slice the short or long way, it's up to you)
1 pint cherry or grape tomatoes, halved
EVOO
sea salt and cracked black pepper
goat cheese for topping

Preheat oven to 400ºF. Pour a couple tablespoons of EVOO on a large rimmed baking sheet. Toss tomatoes thoroughly in the oil and spread out evenly. Sprinkle with salt and pepper. Brush both sides of eggplant slices with EVOO and sprinkle both sides with salt and pepper. If you have room on the same baking sheet as the tomatoes, lay eggplant in single layer on it, otherwise use a separate baking sheet. Roast about 10 mins, flip eggplant slices and continue roasting another 10 mins or until eggplant is tender and tomatoes are caramelized. Remove from oven, arrange eggplant on serving dish, top with tomatoes and their juices, and sprinkle crumbled goat cheese over the top. Enjoy!