This is adapted from Food Network Magazine's Great Easy Meals. Instead of using actual pasta, I opted for spaghetti squash which considerably takes down the glycemic load on your body (meaning you won't get the blood sugar spike that you would from traditional pasta). You could certainly try this with a low-glycemic pasta if you wanted to go that route.

I was shocked that the kids (ages 4 and 1½) gave this dinner rave reviews! They both cleaned their plates and asked for more! I knew that would happen if I had used real pasta but was very impressed that they both loved the spaghetti squash so much (and the greens)!

Cut squash in half the long way. Scoop out seeds (I just discovered that my ice cream scooper works great for this!), place in baking dish, and bake in 375°F oven about 45 mins or until very tender.

When squash is almost done, begin with the rest of the recipe. Fry garlic in EVOO in a large skillet over medium heat. You want a nice color beginning to form but don't over brown or the garlic will be bitter. Transfer garlic with slotted spoon to a bowl or plate. Pour off all but about 2 Tbs of the EVOO (reserve the garlic-infused EVOO for another use or for dipping crusty bread into - which I didn't feel bad about in the least since we were having spaghetti squash instead of actual spaghetti). Add onions and red pepper flakes to the skillet. Cook until onions are softened and beginning to brown, about 10 mins. Season to taste with salt. Add greens and sauté until just wilted, about a minute.

While the onions are cooking, you can remove the squash from the oven and shred into "spaghetti". Use a fork and scrape the flesh, across the short side, to form the strands. Remove all the strands and place in the skillet with the greens and onions and toss to coat, adding more EVOO if necessary. Top with fried garlic chips. Grate Parmesan over the top, do a final seasoning with salt and pepper and serve immediately. 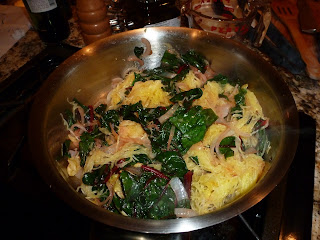