Adapted from Food Network Magazine's Great Easy Meals, this is an ooey-gooey cheesy pasta bake that incorporates bacon and fennel. If you've never used fennel before, it's a little like a cross between celery and onion and has a slight licorice flavor. The licorice flavor totally disappears in this dish though, so don't think it will be weird. This is most definitely not low glycemic, so I don't recommend making this if you are on Phase 1 of the Live Well lifestyle program. 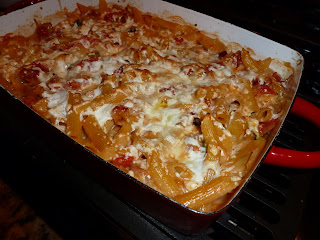 Preheat oven to 450ºF and grease a 9x13" baking dish. Bring a large pot of salted water to a boil. Cook penne to just under al denté. Meanwhile, heat a large skillet over medium-high heat. Add bacon and cook, stirring occasionally, until beginning to crisp. Add onion and fennel and cook until tender, about 5 mins, stirring occasionally. Pour tomatoes with their juices into skillet. Add ½ cup of the pasta water and bring to a simmer, scraping up any browned bits on the bottom of skillet. Stir in the cream and simmer gently for about 5 mins to meld flavors.

Add drained pasta to sauce and stir in the basil and ½ cup of the parmesan. Season to taste with sea salt. Toss well to combine. In a large bowl, combine remaining parmesan with the mozzarella and fontina.

Layer pasta mixture and then cheese mixture into prepared baking dish, alternating and ending with cheese. Drizzle lightly with EVOO. Bake uncovered about 15 mins or until browned and bubbly. Let rest about 5 mins before serving.