I have made zucchini pancakes many times. They bring back memories of growing up - we had pancakes with all kinds of things in them, among the most memorable were zucchini pancakes and apple pancakes. Okay, maybe it's not so much the actual pancakes bringing back the memories as much as it is the vintage griddle which was handed down to me by my parents. The thing is awesome - cast iron plates that reverse to make either pancakes or waffles! I have no idea how old it is but it sure looks like something out of the seventies.

I think I've perfected my own version of the zucchini pancake, using sourdough starter and sprouted whole wheat flour. Divine and healthy!

Mix all ingredients except milk and zucchini in medium large bowl, beating vigorously. Add milk as necessary to thin out to a pourable consistency. Let sit about 10-15 mins. This gives the starter in the batter a bit of time to work and also lets the zucchini set in the strainer to drain off excess water. 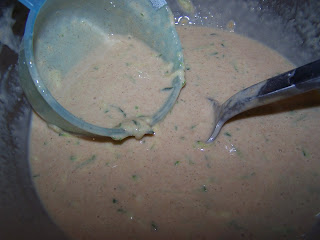 Mix in zucchini and pour by 1/4 cupfuls onto hot griddle. Flip when set around edges and bubbles appear in center, about a minute. Cook the other side just until done, probably about 30 seconds longer. Makes about 16-20 pancakes. I never know because we start eating then before they are all made :) Enjoy with plain yogurt and/or applesauce. 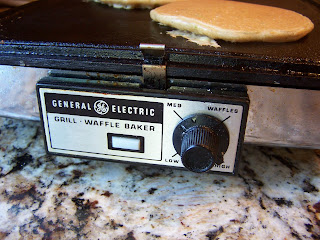 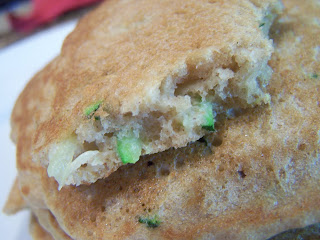 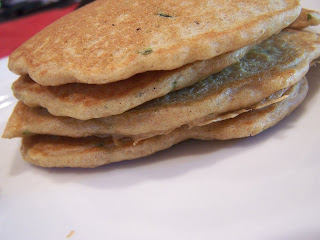 Email ThisBlogThis!Share to TwitterShare to FacebookShare to Pinterest
Labels: Breakfast