Potato and Kale Galette
I've got both potatoes and kale coming in my produce box this week. I don't normally use a lot of potatoes in my cooking because they are high glycemic. These potatoes are local though and I do like to include the local produce when it's available. So, I searched online for a recipe that would incorporate both the potatoes and the kale and I found this delicious sounding recipe for a galette (which I have never heard of before). I'm planning to add some pancetta or bacon in the layers to make it into a more hearty meal but you could certainly leave it out and have a vegetarian meal.

Ravioli with Asparagus and Walnuts 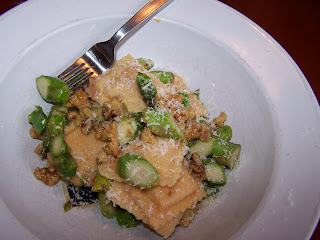 Okay, this is not exactly a 100% made from scratch meal, but I have asparagus sitting in the fridge and saw this recipe in Woman's Day magazine (which I somehow get now. Not really my style but I have gotten some recipes from it that are good). Maybe a good goal for me will be to eventually make the raviolis myself. I don't think it could be that terribly hard.

Cook ravioli according to package. Meanwhile, heat oil in skillet and add the garlic and walnuts and cook just a couple minutes, stirring, until fragrant. Be careful not to over cook garlic. Add asparagus and cook until just tender, about 2 mins. Serve over ravioli and top with grated Parm. 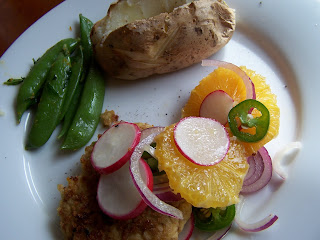 Grate 2 tsp zest from oranges and add to food processor with remaining ingredients through pepper (reserving oranges). Pulse until combined but do not over process. Form cod mixture into eight 3/4" patties. Coat each patty in panko breadcrumbs. Heat 1 Tbs EVOO in large skillet. Add fish cakes and cook until golden brown, 2-3 minutes per side. Transfer to baking sheet and bake in oven set to 400F until cooked through, about 5-8 mins.

Meanwhile, peel oranges and cut away as much of the white pith as possible. Slice into thin rounds. Toss oranges, radishes, jalapeno, onion and remaining Tbs oil in bowl. Add S&P to taste. Serve with cod cakes and sugar snap peas. Sugar Snap Peas with Orange and Mint recipe here.

In 5 qt or larger slow cooker, combine all ingredients through onion. Cover and cook on low 5-6 hours. Stir in peas and cover and cook another 3 mins. Serve over cooked noodles and garnish with cilantro and lime wedges.