I've been playing around with sourdough. It's an interesting subject and one which I'm sure I could study for a very long time and not master. I thought it would be so simple, but it's certainly challenging. I don't know if it's because of the altitude we live at or if I'm just not very competent. My first attempt at bread involved  spending the better part of a week getting my starter going and then on the first day of building it into a dough for bread, I gave up. I had my little ball of silken dough that just sat and sat and never rose. The starter then sat in the fridge, unattended, for another week. I finally decided to try again and luckily my starter was still viable in the fridge. I just had to throw some out and feed it and it perked right up.

My second attempt at the sourdough bread at least ended with two edible loaves. I am pretty sure I left the dough to ferment for way too long. I was trying to achieve the "double" in size rise and it took overnight. I think by the time I baked it, the wild yeast was spent. So the flavor was a bit on the cheesy side, but it was still edible and Jay and the kids thought it was great.

In the mean time, I tried some sourdough pancakes (which were just okay, I'll look for a different recipe next time) and then starting last night I decided to try cinnamon rolls/sticky buns (since my friend Rachel put a bug in my ear about sticky buns, I couldn't get the idea out of my head). I ended up combining a few different recipes and adding my own touches and this is what I ended up with (I decided on adding active dry yeast to the dough so I could adhere to more of a "schedule" with the rise times). I do want to preface this recipe by saying that it is in no way healthy. There really aren't any redeeming qualities to it. It's white bread and sugar. Although the sugar is mostly in the form of dried fruit. It's still sugar. As most of my friends and clients know, I live and eat by the 80/20 rule, which means I do what I know to be right 80% of the time and allow myself a little leeway the other 20% of the time.

Dough Ingredients:
2 cups freshly fed sourdough starter (take your mother starter out of the fridge the night before, scoop out a cup, add one cup bread flour and 1/2 cup lukewarm filtered water, stir, cover and let sit out overnight. Don't forget to feed your mother, too! Then in the morning measure out two cups of the new starter and begin with that for the recipe)
1/4 cup lukewarm milk
1 tsp active dry yeast
1 tsp salt
1/3 cup melter and cooled butter
1/2 cup coconut sugar
2 eggs at room temp
zest from one small lemon
2-3 cups unbleached all purpose flour

Method:
Add the active dry yeast to the milk and let stand a few mins to proof. In large bowl of stand mixer, add the starter, milk with yeast, salt, butter, sugar, eggs and zest. Mix on low (w/paddle attachment or by hand) until coming together. Switch to the dough hook and add the flour 1/3 cup at a time, just until you get a smooth consistency that pulls away from the bowl but is still slightly sticky. Continue mixing w/dough hook for 4 mins, let rest for about 10 mins, then knead again for 4 mins. At this point you should have some gluten developing and the dough should pass the "window pane test" (stretch it out so it gets thin enough to see light through it w/out breaking). Place in an oiled bowl, turn to coat, cover and let rise 90 mins or until about doubled in size.

Meanwhile, heat dried fruit and juice in small saucepan over med heat to boiling, then reduce heat and simmer several minutes until fruit is softened. Transfer to blender and puree (being very careful w/the hot liquid in the blender - leave the lid cracked to vent the steam). You may need to add additional water to thin it out. You are trying to achieve a paste-like consistency to spread on the dough. 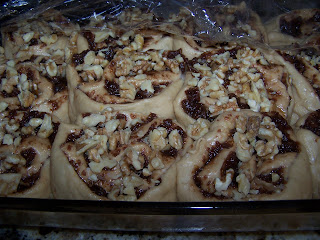 When dough has risen, remove from bowl and press or roll out onto a floured surface. Press into a large rectangle, about 12x16" and about 1/4" thick. Brush with melted butter. Spread pureed fruit mixture thoroughly over dough. Sprinkle with raisins, cinnamon, and nuts. Roll up starting on a long end. Cut into twelve slices and place in greased 9x13" baking dish, cut sides up. Cover and let rise another hour, or refrigerate until morning. Bake uncovered at 350 F for about 20-30 mins. If desired you can spread with frosting or sticky glaze or do as I did and spread with dessert-like fig goat cheese. 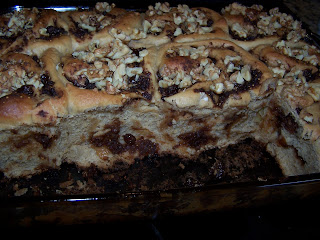 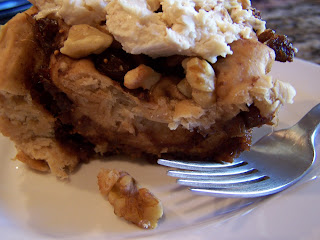